Sewage Block Disaster at a Mall in Irving, TX 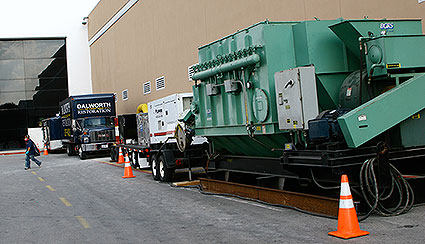 Dalworth Restoration was contacted regarding a sewage failure that caused a small disaster to a mall in Irving, Texas. The professional Dalworth Restoration team took immediate action to successfully complete the extraction and restoration job while keeping the business up and running smoothly. The General Manager of the mall initially called Dalworth Restoration to explain the emergency that occurred within an old theater within the mall that was then being used strictly for storage purposes. Although the old theater had three movie screening rooms, not many people knew it even existed because a newer, up-to-date theater had been built in another part of the mall. Many stores had been built throughout the mall and most of the general public had simply forgotten about the old theater. 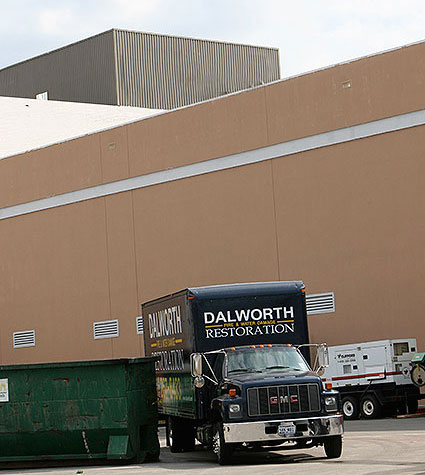 that a more serious disaster than originally thought had occurred from the unknown blockage in the sewer line that backed up to the old theater. The problem was discovered after several complaints that the mall's public restrooms had toilets and sinks clogging up. As a result of the sewage blockage, the movie theater was being filled with sewage and a horrendous foul smelling odor began to permeate the mall. The mall administrators asked Dalworth technicians if they could simply pump the sewage out of the infected area and continue with restoration services. Dalworth Restoration, taking every important issue and concern into consideration, informed the administrators that they needed to have an environmental company survey the damage to advise proper procedures in order to continue properly with the restoration job. Safety and concern for everyone in the mall was the utmost priority.

The diligent mall administrators followed Dalworth Restoration's advice and hired an industrial hygienist to pump out the sewage and maintain contact with Dalworth for the procedures to follow. After the environmental company had the sewage properly pumped out, they contacted Dalworth directly with the next steps to take. Right away, Dalworth technicians were dispatched. The team enlisted an industrial hygienist to write a protocol of procedures consisting of gutting the facility six feet high including the sheet rock, carpeting, flooring, contents, and everything else that was affected in that section of the mall. Dalworth Restoration proceeded by renting a 20,000 CFM negative air machine to create negative air to rid the odor and contain it from spreading throughout the entire mall. The Dalworth Restoration team also had the flooring detail fully cleaned, disinfected and sanitized. Once they were finished, the team once again brought in an industrial hygienist to conduct air sampling to ensure that there was no mold or bacteria; and that the old theater was safe and effective for use as storage again. The entire mall had to maintain normal operations in the safest and most secure manner possible at all times.

The comprehensive, complex and detailed restoration project took two weeks to complete with the removal of sewage and all damaged contents, restoring the facility to a fully cleaned and sanitized place of business. Dalworth Restoration performed such an outstanding job that they managed to save the mall potentially millions of dollars. Dalworth Restoration even generated extra money for the Irving Fire Department by having them remove the movie seats to resell them for a Fire Department fund.

Dalworth Restoration takes pride in knowing that a successful business can maintain operations and productivity, even in the midst of a major restoration project.

If your facility is in need of commercial restoration, don't wait until it's too late, call Dalworth Restoration today at 817-203-2944 or contact us here.