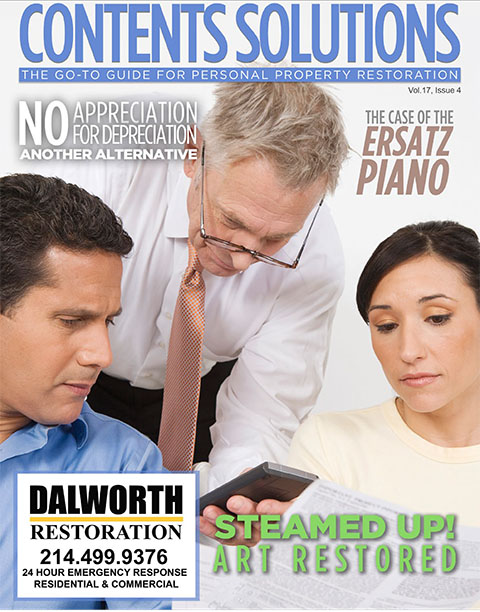 It is common for an experienced agent to urge a homeowner to add special insurance to their standard policy for specifically valued items. And they will also urge the homeowner to keep records of the date an amount of the purchase for those items (preferably in a safe place other than the actual home).

That helps the adjuster to quickly determine the actual cash value of these valuables in the wake of a disaster.

For example, let us say that the owner had an expensive, leather couch, originally purchased for $5000. And let us further imagine that the depreciation for that couch is based on a ten year use expectancy at 10% depreciation each year. It is now 5 years after the purchase, so 10% x 5 years = 50% depreciation, making the couch worth only $2500 at the time of the event.

The couch is only slightly scorched, but was "drowned" by fire hoses and appears to be a total loss. But the homeowner isn't buying the adjuster's offer of $2500 as the actual worth.

He says, "I can't get a comparable couch for that small an amount! This type of furniture has gone up in price not down over the past 5 years!" And he promptly produces his original paperwork for the item, in the belief that he has "done his part."

The negotiation begins in earnest, both parties believing that they are absolutely in the right and are visualizing themselves saying so in court.

There is a third option. The contents professionals deal with fragile fabrics, leather and wood on almost every major job. They have seen and experienced encounters such as the one described above numerous times and they often prepared to repair and restore many articles that are thought to be a total loss. Drying chambers, bacteria and mold remediation are all part of their training.

Knowing which of the deodorization techniques will work and which would damage the leather or fabric in question will be based not only on industry standards, but their continual on-the-job experiences.

For example, ozone is an industry staple for killing mold and removing odors from large items or even entire rooms – but a knowledgeable contents pro won't use it on leather or brocade because it br4eaks down the integrity of the fabric and can leave it dry and brittle. There are alternatives and they know them.

Best of all, their ministrations for restoring items of this nature is a mere fraction of the replacement cost – often astoundingly low even when compared to a deeply depreciated item. Most agents and adjusters agree that contents restoration is a major asset to them on virtually every job, simply because the specialists normally seek to restore an item (or a whole house full of valuables) rather than to replace them.

So the insured thought he had a magnificent piano that he claimed was literally, "priceless," created by a master in the early 1800's.

The contents specialist took a look at the "priceless" work of musical art and could have used everything from IR and UV to microscopes, carbon dating and chemical evaluation to help authenticate its value. But as it turned out, he didn't need any such devices. At a glance he could tell that the top of the piano was made of medium density fiberboard (MDF), which is wood chips and resin, that is compressed by heat and pressure (a process unknown in the 1800's) and a second giveaway was the Phillips head scres used in the piano's restoration (They weren't around until well into the 1900's).

Still, it was a beautiful piece and to the untrained eye, it had been restored to a brilliant facsimile of the original (and my well have had some original parts in it). But the carrier was forced to conclude that while it looked good and sounded good, it was, in the final analysis, only worth about $14,000.

Quite a number of agents, adjusters and even contents pros are surprised to discover that there are actually no chemicals in so called, "chemical sponges."

When they see the remarkable job the sponges do when pulling in soot like... well, like a sponge... they naturally assume there must be some sort of chemical being used to break down the particulates.

The truth is that they are called "chemical because a chemical is added to the latex during their manufactur4er to form them into a usable product – after that, there is no chemical residue or liquid used in their cleaning process.

They can be used on plaster, sheetrock, wood and wood paneling. They pull soot from cork, brick, hard textured surfaces and many contents items.

Surprisingly they don't work well on highly polished surfaces such as gloss paint and some metals (they tend to smear the particulates rather than absorbing them on such surfaces).

The sponges work absolute magic with the residue from "hot fires" but don't work to remove deposits from protein fires and "slow" fires (the ones with grease or oily soot). Other methods must be sought for those.

And one thing the pros always do is to start at the highest point of a wall or room to clean and work their way down – no sense in cleaning the same wall more than once!

All Steamed Up! Art Restoration

A couple of years ago Property Casualty 360 published a story by Tom Kirkpatrick in which he told the story of a couple who placed a claim for what appeared to be a total loss. It was a painting by a highly touted artist who had a similar (though not as good) work sell for $25,000.

You may recall earlier articles in Contents Solutions where we told of a similar phenomenon that occurred when cups of hot coffee where rested on an antique wooden table and left white rings in their wake. This is exactly what happened to the painting. A cloudy milky layer occluded to the beautiful art beneath. But they could not use heat to draw the moisture out of the way the contents pros do with wooden furniture.

The homeowner's wife had tried to clean it, but was disappointed with the results – although she had the right idea. The artwork had been covered with a thin layer of varnish and it had fogged as the steam penetrated the varnish but left the actual painting intact.

The consulting contents pro called in an art conservator who removed, them replaced the old, yellowing varnish for only $850! The actual value of the artwork was in no way diminished (and may well have been enhanced) by the conservator's efforts. The carrier saved thousands of dollars, and the homeowners received their artwork back in better than pre-loss condition. 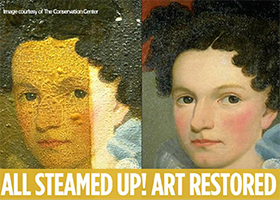 For privacy reasons, we can't show you the image of the original art, but the picture above shows the result of removing and restoring heat-damaged varnish by the master conservators.

The contents professionals may not always be able to perform specialty restoration, but odds are good that they will find the right person for the job – in their million dollar database.

Contents socialists are remarkably resourceful people. They have subject matter experts who can restore high value items. They have sources of contact for everything from expensive art to Beanie Babies. Experienced adjusters know to check with them before "cashing out" a damaged item and agents rely on them to save items for their clients that might otherwise be sent to the local land fill.

Often, they can act as ambassador for a harried adjuster and they can make an agent look very good to the insured.

Of course they packout, clean and restore hundreds of items (sometimes thousands) on a single job, but they are far more valuable than cleaners and movers who are not trained in restoration. Once you see what they can do, it is likely you will ask for them again and again.