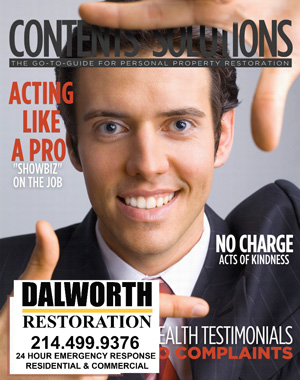 Structural restoration professionals have been watching the contents pros lately to see why it is that the contents specialists have been receiving such terrific customer testimonials, and why they are so popular with adjusters, agents, building managers and other customers.

The answer, of course, is that contents pros are “customer pleasers!” And yes, there is a little showmanship involved.

Imagine a homeowner who opens her door to the team for the first time. They are all lined up on her front steps (a full step back from the door). The contents manager smiles and says, “Good morning Mrs. Collins, I’m Mary Frago and I’m here to restore your home.”

Then the manager gestures to her team and introduces them each by name – perhaps saying something about each as they step forward to greet the client as in, “This is Tom Macon, he is an absolute wizard at packing fragile items.” Or, “This is Cindy Timmons, she will be taking pictures of all your valuables and creating an inventory that she will give you, on your computer, at the end of each day,” etc.

And can you visualize the confidence that the customer experiences when she sees the digital photo inventory person placing Post It notes on items of particular importance to the insured as each one is identified – as in, “Please be careful with the china set, it is a tea rose collection from World War II and was brought to America by my grandmother.”

A quick note such as, “Antique China Set – FRAGILE,” placed on the item, may not change how they are treated by the workers (they are already well trained and recognize fragile and valuable things at a glance), but the insured feels that she was listened to and acknowledged – and that already raises the team in her esteem.

And at some point you may see the contents manager handing a business card with a telephone number handwritten on the back, saying, “This is our hot line number. It has at least one of our staff available every day of the week, every hour of the day. It is the same number I gave your insurance adjuster and you can call us directly if you ever have a concern.

The adjusters who hear that realize that the manager is taking the burden of the “midnight calls” from his (her) shoulders and accepting direct responsibility, so the customer can call and never trouble the adjuster with small concerns.

Sure, there is a touch of showmanship – the owner doesn’t need to see the staff lined up on the sidewalk. The insured doesn’t need to know that the telephone number is the same one the adjuster got – but each of these little “flourishes” makes the customer into a supporter and helps create praise for the carrier, the front line workers and the project in general, while diminishing the workload for the insurance representatives.

There may well be hundreds of times that a contents team could simply progress on various parts of the job without informing the client of what they are doing – but they have found that “asking permission,” gives the owner a sense of control and is also a subtle way of showing the insured that the contents pros are doing an outstanding job.

“We would like to unplug the ceiling fans before we clean them with smoke sponges. Is that okay?”

“We were going to use baby safe solutions in Tina’s room, but we noticed that she is a toddler, so we are thinking that we should use the baby safe compounds throughout the entire house – would that be all right?”

Obviously, we don’t need permission for such things – but asking brings the care and service the pros use to the customer’s attention, which often translates into positive statements on sites where the insureds get to critique their experiences.

Such statements can translate into renewed policies and new customers.

Contents specialists charge for their work and expertise just as any professional does, but it is common for them to take a moment here or there to commit random acts of kindness and generosity for which they expect no payment.

Sewing an “eye” back on a beloved Teddy Bear, tapping a loose carpet back in place on the staircase, wiping black scuff marks from a door or wall that had nothing to do with a fire or flood – it’s just good business. And when the owner hears the words, “No charge,” it’s often just what is needed to cool things down when a storm is brewing between adjuster and homeowner.

Here again, presentation is the order of the day. Instead of quietly committing the act, it is often more propitious to point out what they are doing, so the owner is more likely to appreciate that it occurred.

And asking permission may well be the best way to do just that, “Mrs. Collins, it looks as if you tried to remove the art your kids created with permanent maker on the back of the bedroom door. We have compounds that can accomplish that – would it be all right if we tidied it up a bit for you? No charge of course.” 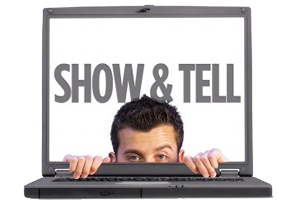 “Show and Tell” is another theatrical device contents pros sometimes use to keep the client enthusiastic and supportive throughout the job.

Industry spokesperson, Steve Toburen calls them “Moments of Truth.” Let’s say that a white couch has been liberally festooned with “strings” of soot from a slow burning plastics fire.

The contents pros clean half of it so that it looks like new, but they leave half of it still looking pretty grim. The project manager brings in the owner and says, “It looks as if we are going to be able to restore your couch to pre-loss condition.”

The owner sees it and is impressed beyond measure. But if they had cleaned the entire couch without showing the contrast between “thoroughly restored” and “remarkably soot-covered,” the owner might instead have been looking for any small flaw or inadequacy. As it is, she (he) saw the enormity of the challenge and the expert service supplied by the team – by doing things “by halves,” the showmanship of the manager pushes the project forward with far greater support by the insured.

This sort of demonstration can manifest in many ways. A skeptical building manager may have decided that his 37 wet computers are a total loss and cannot be restored. But, a contents supervisor may take only one of them, clean it, restore it and return it in working, pre-loss condition. Thus earning the job of restoring the others.

Or perhaps even simpler would be the demonstration where one of the workers deliberately (and in full view of the owner) sweeps off the front porch, steps and sidewalks before the team even enters the home. And if, by some coincidence, it has snowed, the team members shovel off the porch and sidewalks so as not to track any slush into the home they are about to clean and restore! And, as a small bonus, some of the neighbors may be watching as well and might just be impressed with this initial gesture.

Do you recall the article we offered some months ago in which an adjuster had rightfully refused to pay full price to replace an aging (sagging) old leather couch that had been scorched in one small area during a fire. The owner was livid until a contents pro sprayed a little leather color on the scorched area (the couch was black) and the owner liked it so much he asked if she would do the same thing to the whole couch!

In today’s uncertain economy, some customers have been known to make false claims against restoration companies, claiming shoddy workmanship or damage to valuables, in the hope that it will somehow reduce their bills. The way the pros deal with that challenge is to have the owners “sign off” on each room or each project or part of a project, indicating that the team had performed satisfactorily. And, of course, they have a strong “back-up” with all the pictures from the digital inventory.

In that manner it is almost impossible for the insured to come back later and say that those “parts” were in any way, unsatisfactory.

And if the parts were good, the job was good.