Adjusters and agents know that when they have a trained contents team on the job, they can rest easy because contents pros save the insurance carriers money and produce satisfied customers on virtually every job.

If you are one of our “constant readers,” you undoubtedly remember some of our past articles which the contents front-line workers saved an estimated $4,000,000 for one university by carrying hundreds of boxes filled with smoke and fire-damaged items out of the building and restoring them by cleaning out the soot, grit and smoke particulates (working round the clock).

Untrained workers often create cross-contamination by moving smoke-damaged items from one room to another (for “storage”) not realizing that the smoke odors go with them! Contents pros simply don't make that sort of “rookie mistake.”

Sometimes inexperienced teams will attempt to mask smoke odors with nice-smelling citrus fragrances, not realizing that once the orange or lemon scent is gone, the smoke smells will come rushing back – prompting calls from severely dissatisfied home or business owners! Trained contents pros use new, modern methods to remove the smoke from walls, ceilings floors, counters, clothing, art works – even books and “bric-a-brac” (you may recall an article in which the contents specialists restored tens of thousands of dollars worth of smoke-damaged figurines).

And when restoring banks, restaurants (after a grease fire), hospitals and other businesses, one of their main priorities is to “get the doors open.” Because a service based industry is losing money every day it can't serve to the public.

One statistic that surprised even us was the one that came from a consortium of contents restoration companies that stated they had, “...saved the insurance industry $86,782,013.91 on 11,053 claims,” by cleaning and restoring soft contents that would otherwise have been “cashed out.” And their figures are easily believable when you think back to a recent article we shared about a single $4000 Chanel purse that had been smoke-damaged, saturated with water from the fire hoses and left in sub-freezing temperatures (the owner did not want a cash settlement – she wanted the purse, because Chanel is famous for deliberately discontinuing a certain line of products in order to maintain their exclusivity).

The contents pros are also meticulous about creating a painstaking photo inventory, so that not only are there no lost items, but every item can be returned to the exact place from which it came!

And if there are multiple fires in a given area, adjusters and owners are often astounded at the “assembly-line” efficiency displayed by the contents teams. No lost time, no confusion and the adjuster can get each job off his (her) desk – seamlessly moving to the next challenge with the contents pros by his side.

Paper can absorb smoke odors like a sponge! And sometimes an insurance adjuster does not feel that his company should have to pay for the cleaning and deodorization of various documents that are important to the homeowner or business owner.

In these cases we don't want to cross-contaminate by putting the smoky, soot-dusted papers with anything else, so we place them in large, see-through (smoke proof) bags so the owner can go through them later and can scan them or photocopy the ones that are of most importance.

It costs about the same as what we would charge to sort and discard them so everybody wins. And instead of spreading smoke odors all over the house, the owner can set them aside for a time when everything else has quieted down (no missed bill payments, no lost tax records, no unreturned mail – no angry and frustrated client).

More often than not, when there is fire damage, there will be water damage as well. Some of our readers may recall the article about the mansion in Tennessee that had an extensive fire that required the firefighters to use in excess of 70,000 gallons of water to extinguish. The contents pros were able to restore massive amounts of antiques, exquisite rugs and other artifacts – but they had to contend with water damage as much as with smoke and fire restoration.

Contents pros focus on restoring instead of replacing no matter what the cause for of the loss. Unfortunately, such is not the case for companies that only have a structural restoration team.

For example, when the contents restoration manager arrived at the mansion we just mentioned, he saw a large ball of frozen, colorful fabric in the front yard – someone had dragged a massive antique rug outside (after it had been thoroughly saturated with water from the fire hoses). The winter night had created what he called, “...an ice ball.” The rug was valued at $200,000, but the firefighters were... well... fighting a fire. And the structural crew was looking at floors and walls – which, of course do what they were hired to do.

The contents team was able to fully restore the rug to pre-loss condition. But they might have walked right past it if they weren't trained to look for it. 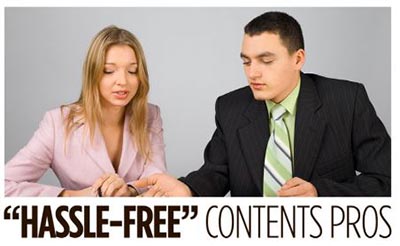 Maybe you have experienced it – there is a fire or flood and a contractor submits an estimate, but the adjuster never actually meets him (her) until the job is over and an invoice appears. The adjuster objects to several of the charges and the whole project is put “in review.”

We caught up with Barb Jackson CR – the leading authority in contents training worldwide, to ask how one would remedy such a situation.

”Professional contents managers rarely face this sort of circumstance,” she explained. “They are trained to seek out the insurance adjuster at the beginning of an assignment. We can usually create a viable scope of the job so quickly that it happens during a 'walkthrough.' It is based on what we see and what we know can be restored. But we wait for the adjuster to tell us what the carrier will pay for and what they won't.

”The adjuster knows which charges his or her superiors will accept, based on long experience. Then we move forward with the adjuster's own corrections and insertions. He 'signs off' on the work before we even begin.

And if there are change orders, we make sure both the homeowner or business-owner and the adjuster have agreed before we proceed. There is never a disagreement or need to slow the project down due to a misunderstanding.

”It is a professional and aggravation-free way of completing an assignment. Of course, we never forget that our client is the homeowner or office manager. We consider the insurance adjuster to be a trusted partner in the operation – one who wants the job completed as quickly and inexpensively as we do.

”That sometimes comes as a surprise to other types of contractors, but because we save the insurance carrier so much money by restoring instead of replacing, the adjusters are always glad to have us as 'partners.' And the homeowners are thrilled that we are dedicated to saving their valued items instead of having them 'total lossed.'

”Adjusters are always glad to see us. It is rare that we have to disagree at all – and when we do it is so that the owner is satisfied and the adjuster can show his (her) bosses a job that is a credit to the carrier.”

Here is a quick insider secret: After a fire, everything in the house or office is “stressed.” Things are dried out and brittle (leather can “age” and become discolored – plastics can “flake” and crack), some items have tiny fractures that are all but impossible to see with the naked eye (heated crystal can become reduced to fragments if exposed to cool air).

To get the smoke odors out of wood, paper, walls, and other semi-permeable substances, some contractors will use thermal deodorization. The problem is that the high heats of such technology can further break down wood, leather, books, etc.

Fragile items rarely do well when exposed to heat, ozone or most volatile chemicals. The contents pros have far more human friendly techniques – ask about them on the next job!