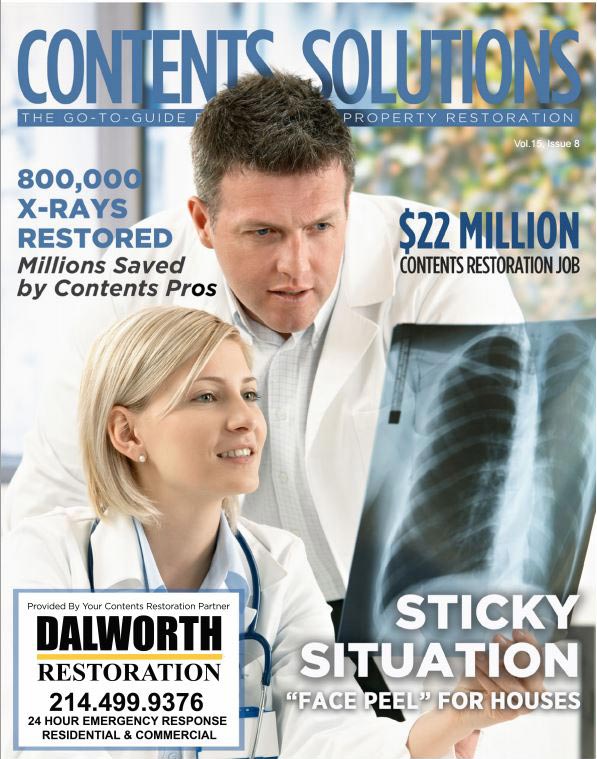 Our "constant readers" may recall some years ago when we published an article that explained how contents companies are now restoring photographs, film, x-rays, etc. One self-styled expert called us to criticize the article, adding that he was a consultant for the Smithsonian and the Metropolitan Museum concerning matters of restoration. And he added, "you can't restore film once it is wet. The components stick together and you have an instant doorstop."

Our "constant readers" may recall some years ago when we published an article that explained how contents companies are now restoring photographs, film, x-rays, etc. One self-styled expert called us to criticize the article, adding that he was a consultant for the Smithsonian and the Metropolitan Museum concerning matters of restoration. And he added, "you can't restore film once it is wet. The components stick together and you have an instant doorstop."

Shortly after that you may have seen the story about the contents pros who restored 800,000 x-rays from a single medical facility. Now, years (and tons of restored film) later, we can tell you the rest of the story.

A pipe had burst in a Virginia hospital and flooded the storage room where the x-rays were kept. The insurance company needed specialist contents pros if the film was to be restored. They recommended a British contents team, who contacted an American team that had refrigerated trucks (freezing the x-rays stopped any further deterioration until they could be transported to the drying facility).

The Brits used an American-based drying facility in Illinois for their final plan and a total of 15 personnel washed contaminants off the x-rays. Then, they created a real-time inventory so that when a physician called for a single x-ray it could be shipped overnight and be waiting for the doctor and patient the next morning.

Due to the fragile nature of the images and their irreplaceability, the contents manager chose to have the front line staff wash and dry all the film by hand – one at a time. When an official from the hospital was invited to view the process, he mentioned his astonishment to see how labor intensive the procedure was. He mentioned seeing the rows and rows of x-rays hanging throughout the building.

Both the British and American personnel had extensive training for the restoration of water damaged materials including books, documents, film, photographs and even blueprints. They proved to be the absolute right selection for the job at hand.

The insurance company could have lost a fortune if the x-rays had not been restored – can you imagine lining up patients for 800,000 new x-rays? The cost would have been phenomenal (think millions of dollars)!

If the hospital staff had been able to round up all the patients for whom the original x-rays had been taken and had been able to process one x-ray every hour of every day, they would have been working 24 hours a day, seven days a week for almost 10 years!

As it happens, the entire project (including repairs to the medical facility took only 12 weeks).

From that day forth, the contents pros were officially included in the disaster plan for all eight of the affiliate hospitals and outlying facilities that associated with the one that suffered the initial damage.

The expert from the Smithsonian learned a valuable lesson – insurance companies know that contents pros do the impossible every day (now he knew it too). Sometimes they save millions on a single job. Sometimes they only save the insurance carriers a few thousand -but they always save by restoring instead of replacing (and they do it all over the world)!

When the insured saw the state of her "Black Caviar" Chanel purse, no one was happy. It was covered in soot, smelled strongly of smoke, was saturated with water, and had frozen solid after having sat in freezing January temperatures for two weeks.

Chanel is known for discontinuing items in order to make them more exclusive and expensive. This one item had a replacement value of over $4000. The adjuster saw it as a total loss and was prepared to "cash out," but the contents pros could see the owner's distress and had one last trick they could try.

They carefully removed the insulation and sheetrock dust from the interior of the purse, then they placed it inside a specialized industrial washing machine that moved very slowly and used unique cleaning solutions as part of the process.

The result? The purse was returned to the owner in "better than pre-loss" condition. The adjuster was ecstatic. Why? Because the total cost of cleaning for the $4000+ genuine Chanel was just $79.99.

Contents specialists such as these have been known to restore everything from baby shoes to sporting equipment. From firefighter's protective clothing to wedding dresses. They kill viruses and bacteria (even MRSA) and are boasting a restoration rate of as much as 85% of items that are typically "total lossed." They routinely remove grey water contaminants and smoke odors. For them it's all in a day's work. The contents pros save the insurance companies serious money on virtually every job -- no kidding.

Some years ago, our researchers found several contents companies were using new, yet simple technologies to deal with smoke and soot damage.

Some products were applied like paint, but dried to form a non-permeable “shield” which sealed contaminants and kept them from spreading.

Other, equally intriguing mixtures were applied like ordinary glue that when dried could be peeled off the surface taking with it soot, dirt, dust and other particulates that had penetrated the intricate nooks and crannies of ornate masonry, statues and odd shaped walls, arches and ceilings.

It is an amazing compound that reaches in, adheres to the contaminant, then dries, forming a bond strong enough to pull the impurities out as it is peeled away.

Some solutions can be “painted” on with a brush or roller. Others can just be sprayed. And they don't use water so they can be used on statues, walls, floors, stucco and a variety of other surfaces.

Right now the substances are largely used for specialty cleaning, but we think they may well be part of every contents team's favorite tools in years to come.

The Contents Pros can handle large loss cases as well as family homes and every once in a while they get one for the text books!

A ski supply company had a fire – everything was smoke damaged and two challenges and two challenges were staring them (and the pros) in the face. First, they were losing about $400,000 a day in business interruption costs and second, they might have to “total loss” over $22 million to stock!

The pros went to work – knowing that ski clothes, skis, or anything else that smelled like smoke, could never be sold through one of the company's retail outlets.

The structural workers decontaminated the building and got the smoke out. The contents pros set up a series of ozone chambers and ran a test batch of ski clothes through them that were then sent home with the employees of the ski company overnight.

Once they got the “go ahead” from their initial efforts (no employees could discern any smoke odors at all), they went into high gear and processed every other sellable item the same way.

Meanwhile, they brought in sonic baths to be used onsite in order to clean all the shelving and wire baskets that normally stored the various ski items.

Teams worked in shifts, around the clock – because the company was still losing about $400,000 a day as long as they could not send their stock to their outlets.

How did things turn out? Well, 99.9% of the stock was saved and was able to be sold.

There were 36,000 plastic-wire baskets and they were worth about $85,000 to replace – but when the owners checked, it turned out that they could not get new ones for 6 months.

6 months multiplied by times $400,000 a day was too great a horror to contemplate.

How much did the contents pros save the company? It all depends on who is counting – but nobody denies that it was tens of millions!

A CAR'S REAL WORTH

So how do you know if a car is worth restoring to pre-loss condition? We know of cars that were completely flooded – but still sold for thousands of dollars.

Patricia L. Harmon of “Property Casualty 360” magazine offers a rule of thumb, “...The short definition according to State Farm is that a classic car is any 'vehicle 10 or more years old, which is rare or of special historical interest because of exceptionally fine workmanship or limited production.'”

So how would you feel about buying a car that had a lot of bullet holes in it? We might consider it – provided it was previously owned by Al Capone (or James Bond)! The contents pros know how to find a car's real worth – they research like everyone else.