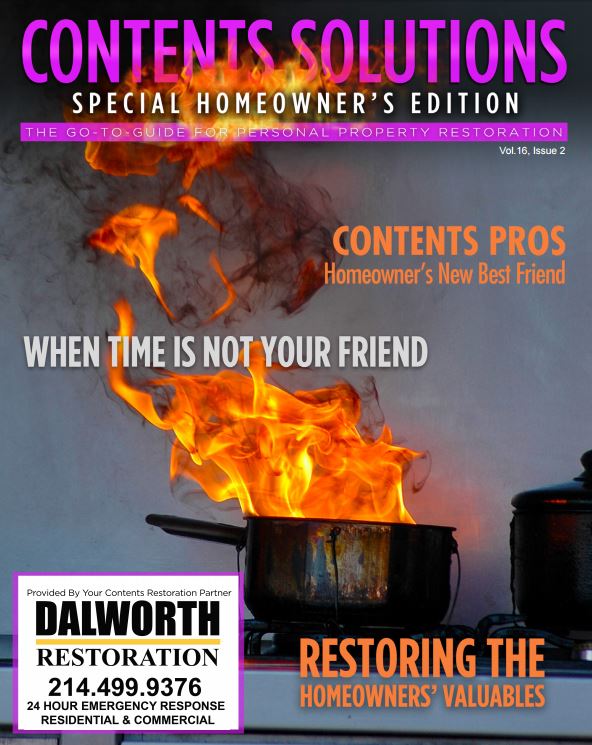 damage, sewage back up or even damage from high winds, there are many things that are expected of them of which they may not be aware.

For example, did you know that most home insurance policies actually require the insured to make temporary repairs in order to protect against further damage? They often refer to this as “reasonable and necessary repairs.”

Obviously you would want to cover holes in the roof, walls, doors and windows with plastic or boards. There are actually “board up” specialists with most major restoration companies who can do all of that for you.

But how about your couch that is sitting in an inch of water? The clothing that smells like a campfire? The scorched china? The antique carpet that now has gouges from the heavy fireman's boots or is saturated with contaminated water?

The board up team can easily turn its attention to drywall, electrical wiring and other structural repairs, but it is rare that they are trained in how to restore a homeowner's valuables.

This is where a “contents” crew” becomes a treasured asset. Hopefully you already have pictures of the items that were damaged, but even if you don't, the first minutes the contents pros are on the job are spent creating an initial “photo-inventory” of all significant items. You accompany them on a “walk through,” pointing out specific concerns you have about the items to be cleaned and restored.

You are given a copy of the inventory for your computer and the insurance adjuster receives a copy as well.

Contents Managers are skilled estimators and they will step in on your behalf to explain the anticipated procedures and cost of restoration. The insurance representative will then share with the manager the limits of your policy, and a pre-estimate and “scope of work” can be negotiated so that you get the most for your insurance investment.

Surprisingly even televisions, monitors and computers are now being restored to pre-loss condition with new technologies. And a thorough cleaning with space age solutions are getting smoke odors out of clothing, bedding and even antique carpets, so they can be restored as well.

Best of all, when an adjuster agrees to the estimate submitted by the contents contractor, there is very little chance that he (she) will reject it later – so the entire job moves forward with approval from all quarters – especially yours.

TIME IS OF THE ESSENCE

Speed is one of the major factors when dealing with fire damage or water damage (or even sewage backup). We are told that mold begins to form in 48 to 72 hours (whether it is from flooding or water from the fire hoses).

Wet electronics can be restored (really!) But when water mixes with ash from a fire, the results are an acid that will pit and discolor many metals – and worse, if it is forming inside a big screen T.V. Or a computer, the newly formed acid can eat away at the circuitry, rendering the electronics unrepairable in as little as three days.

But the electronics can be saved y washing them with deionized water and drying them in slow (low) heating chambers. There was a time that no one even tried to repair such things and routinely just sent them to the local landfill, but now a very high percentage of electronic machines can be restored by contents professionals who have done it many times before.

But as we mentioned before, time is not on your side, so you must get the professionals on the job as soon as possible.

Imagine this, there are four heavy boxes that need to be moved to an awaiting van outside in your driveway. There are four workers, and each takes a box at the same time as the others, carries it out and loads it on the truck. The process takes about five minutes total. And 4 people at five minutes each equals 20 “man-minutes” for the entire job.

But let's say an adjuster says that using four workers is just too many. One worker can do the same job. Thus a single worker takes all four boxes out, using about five minutes per box. In this case four boxes at five minutes each equals the same 20 “man minutes.”

It is like most things in life, the more people helping, the faster the job gets done, but in the case of a worker, the insurance company representative is searching for ways to get the job done less expensively.

That is why contents managers take the time at the beginning of a job to work things out with the adjusters. Some contractors don't – they actually wait to the end of a job, present a bill and end up fighting the insurance company over what should have been done or could have been done, rather than getting all that decided before the job even begins!

Contents restoration industry spokesperson, Barb Jackson CR, calls this process a “pre-estimate,” and she presents it to the adjuster before a formal estimate is completed. That gives both parties a chance to discover how to best serve your interests.

Those who present an invoice at the end of the job can cause trouble for everyone concerned – including you, the homeowner. 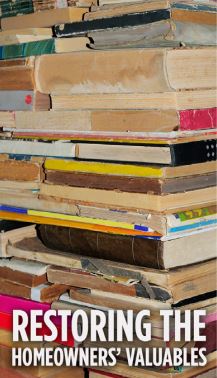 A structural team wants to get to the walls, floors and ceilings. They may move a couch or a bookcase, but that is only because it is in their way.

The contents pros examine the books on the bookshelf – are they wet? Is there soot and ash on them? Can we clean them on the spot? Or will they have to be moved to a safe facility to be restored?

One elder fellow was livid with an adjuster for not being willing to pay to replace a collection of mystery novels by author Mickey Spillane. The man swore that they were worth a fortune, but the adjuster was sure they could be replaced for about a dollar each at a used book store.

The contents manager went online (Ebay) and found a collection of the same titles that had been lost, plus some the older fellow did not own, for a reasonable price. It was a little more than the adjuster had been offering before, but he saw this as a viable alternative.

The senior citizen begrudgingly accepted the new collection – he only wanted to know one thing, “How soon can I get them?”

Another contents pro cleaned and dyed a scorched spot on a leather couch that the adjuster felt was to depreciated to justify the sort of money the owner thought it was worth. Once the contents worker had cleaned up the damaged spot, the angry owner calmed down and asked, “Can you do that for the rest of the couch?”

Contents restoration professionals are trained to be remarkably innovative. They restore, repair, detail, clean and make whole all manner of items that used to be routinely “total lossed.” They save the insurance companies massive sums by restoring instead of replacing and they save things that matter for the insured.

No amount of money can replace wet and damaged photo collections, but the contents pros sometimes painstakingly scan them into a computer and salvage the images in a whole new way – even though the paper on which they had been printed is no longer viable.

Silver collections, crystal china, porcelain dolls, wood furniture, antiques and much more are routinely restored with clever and unexpected methods. It all has to do with the way the contents pros are trained.

An adjuster may find it necessary to explain that he (she) is backed up with many cases before yours, but it is imperative that you stress that your electronics, wood floors, wet art work, etc., can't wait a week for him to get around to you.

A contents manager can be a strong ally in these times. Once an insurance adjuster knows you have a competent estimator looking at your valued items it makes things easier for him to start agreeing to specific parts of projects – and remember, there is a clause in your insurance policy that in effect, orders you to make reasonable and necessary repairs until the representative can make an estimate himself.