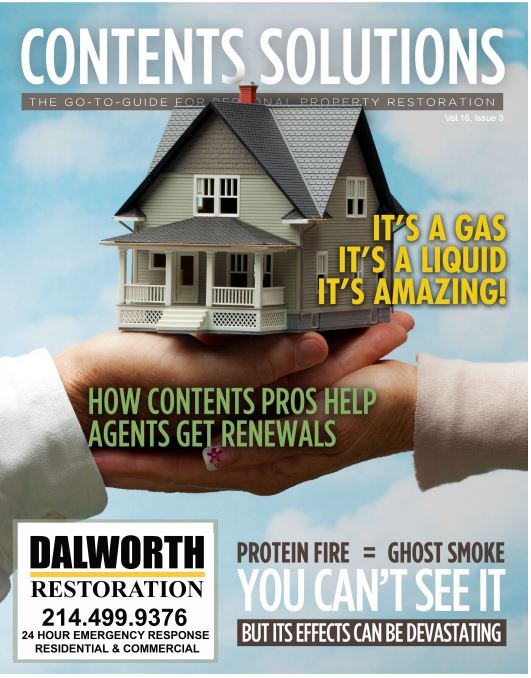 You may have already read one of our articles about how contents professionals can help an insurance agent maintain good relationships with the insured. You may recall how we explained that one of the best ways contents managers do it is to include the agent's business card along with a small gift to the insured at the beginning of the job on the back of the card it would say something like, “Because I care,” or “I'm here and I'm just a phone call away.”

Along with a small basket of comfort foods, (fruits, nuts, popcorn, etc.) or a bouquet of flowers, your card reminded them that you are standing by for them.

And at the end, another flower arrangement or some other small bug significant gift has your card tucked in and on the back it says something like, “Welcome home. Looking forward to serving you for years to come.” It creates a strong indication that you were there throughout their ordeal and are still “standing guard,” for all their future insurance needs.

Some agents find that to be a powerful technique for creating and maintaining loyal purchasers for their recommended policies.

But there is another way they can help as well. Many agents and adjusters don't realize that contents professionals are actually specialists in the restoration community. And they can help to impress your customer when he (she) has a special contents expectation.

For example, let us imagine that you have a client who has a valued wine collection, and when you visit the house you overhear the contents project manager speaking with the homeowner saying, “Yes, we are very aware of how a wine collection should be treated. Of course, we will transport your collection to a secure facility to remove the smoke odors. And we will cushion the bottles so the labels don't receive even a scuff mark.”

“We'll have a temperature-controlled room set up and properly chilled before the bottles arrive and...”

Or you may have a customer with a valued coin collection and you hear the contents project manager say, “Yes Mr. Trump, we will wear nitrile gloves when handling your collection. Cotton, as you know, sometimes leaves micro-scratches that can't be seen by the naked eye, but which collectors notice and often use to devalue a collection...”

This is the sort of talk a collector wants to hear and it reflects very well on the insurance company that sent the contents restoration team. Contents pros don't know everything – but if the specialty is known prior to meeting the owner, he (she) can usually make a cogent presentation.

In fact, Contents Solutions magazine has had articles about restoring everything from submarine parts, to fine art; from teddy bears, to Coco Chanel hand bags; and from moose heads to fine china and crystal.

Every job you send to the contents pros brings you that much closer to a stellar year for policy renewals. Plus, passionate collectors speak to others in the niche that intrigues them. When they find a professional who can protect them in times of disaster, they don't forget and they don't keep it a secret.

Most adjusters and agents have seen “zipper doors” that separate the noise and dust from one part of a project from another. And of course, most restoration companies put down a mat for their personnel to use before they enter the home.

Contents pros are intensely aware of cross contamination, so it is common for them to add another layer of protection – “sticky mats” or “walk-off” mats. These are like small bath mats, but with a sticky layer so that when walked upon soot, ash and other particulates that are pulled from the shoes of the workers and remain on the mat.

Of course shoe covers are another short term “fix” for cross contamination. When a frontline technician leaves a smoke-damaged area in order to proceed to the packout or cleaning space, the shoe covers are discarded before proceeding – sometimes disposable coveralls are employed as well depending on the severity of the contamination.

All this is just part of the exemplary service you can expect from a well-trained, well-equipped contents company. Not doing it would mean lost time (cleaning up a second time), more expense and often, a disappointed homeowner.

FIRST DO NO HARM

We've seen it (and we'll bet you have too). A mover has a heavy chair or an ungainly table and is waddling it out to an awaiting truck. He bumps it against a doorjamb leaving a small but unsightly (and probably discolored) dent. He sees the homeowner watching and with an apologetic shrug, he moves on.

Or maybe carpet cleaning or water extraction hoses are snaked from a truckmount into the house, winding their way to the target location and rubbing against unprotected walls and baseboards, subtly scraping away paint and plaster. Sure, the abrasions are minor in comparison to all the other work going on, and are quickly overlooked or forgotten by the worker – but not by the owner.

Normally contents pros wrap all hard edges on tables, chairs, even bed mattresses – to protect not only the item itself, but the walls, doorways and other solid objects normally encountered on the way to the truck.

And there are also “corner guards” that are meant to protect the wall rather than the item being moved. Corner guards are often made of plastic or rubber and can be clear or found in a variety of colors. Some are adjustable so the guard can be positioned up or down depending on need.

We have seen contents pros adapt a piece of foam rubber as a temporary protector as well – they just bend the foam around the corner, then affix it in place with either painter's tape or masking tape. It won't last long and the tape will eventually work its way free, but when you are moving a grand piano or an antique credenza, there are few precautions that aren't worth the effort!

When industry spokesperson Ken Bezar, demonstrated the new disinfectant/deodorizer, he asked contents instructor Barb Jackson CR to place a pile of smoke damaged clothes in a closet. Ken then put a small, plastic packet in a cup of water and put them both in the closet as well.

6 hours later, they opened the closet door and were greeted with... nothing. All the smoke odors had vanished!

But Ken was just warming up. He explained that his proprietary delivery system of Chlorine Dioxide didn't just remove odors (by destroying what was causing them) but it killed bacteria as well. In order to be called a “disinfectant,” a compound must kill 99.999% of the virus within 10 minutes: Ken's system did it ten times over!

A company brochure explains that it, “...physically changes the chemical make-up of pathogens and odor causing compounds, obliterating them.”

And, “...Odor control jobs that used to require a big and expensive hydroxyl or ozone generator can now be completed with just three small packets... no equipment costs.”

When Ken was challenged with a facility that was over a million square feet, some people might have expected the job to take a few days – Ken was finished in just 8 hours!

And a YMCA facility in Florida had 600,000 cubic feet of smoke odors – it took just 6 hours to completely eradicate the odors there as well.

But the Chlorine Dioxide isn't done yet. Put a special plastic packet in a large spray container and you have a mold remover for hard surfaces – which doesn't harm colorfast clothing or other soft contents.

And here is where it gets downright strange! Ken dilutes it down to a point at which it can be used to kill bacteria and mold on food crops (tomatoes, medical marijuana, etc.).

He even prepared a special solution that is so safe, his kids take it to school to spray on water fountains before taking a drink!

In the very near future, we'll tell you more about this remarkable formula – it has our attention!

The big problem with a protein fire (from burned meats, eggs, fish, etc.) is that unlike most smoke damage, it becomes invisible (very little visible soot and ash). But it leaves a greasy coating on everything the soot touches. And it has an odor that a blindfolded adjuster could recognize before he (she) even entered the house.

If not properly cleaned and deodorized, the odors can last months, even years after the fire.

It finds its way into books, behind shelves, under beds and even in the insulation of the attic. Some adjusters reluctantly look for things to cash out, but the contents pros have an arsenal of cleaning “weapons” at their disposal that were created to deal with such slippery smoke damage.

Just ask, we think you'll be amazed at the arsenal they can bring to bear!