Recently, a “hoarding house” contents pro described the scene, “When we arrived, the owners were long since gone and weren't coming back. The estate lawyer had hired us to clean out the house and make it “sellable” and to find all the valuables that were buried inside beneath layers and layers of detritus.

“The contents manager couldn't get the front door to open more than an inch or two because of the piles of fragrant garbage that was piled against it. So he forced open the back door and staggered across mountains of papers, bottles, compacted food, discarded TV dinners, etc.

“He then pulled the front door off the hinges and we literally had to climb up 3 feet of trash in order to stand in the living room...”

The challenge for a contents team manager in such situations is that to write an estimate would mean that he (she) would need psychic powers. Because she would have to be able to see (with x-ray eyes) what lay behind the layers that were invisible.

And many adjusters would be tempted to say, “Just Total Loss it. Clean everything out. Load the dumpsters and make the place livable.” 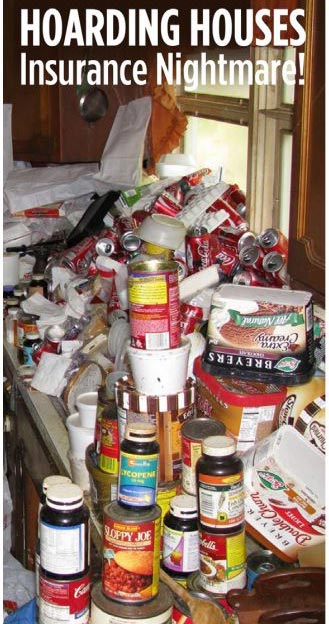 But in the case of the hoarding house we just mentioned, part of the crew's task was to find gold coins, gold religious medals, stores of cash and important documents.

The team found it all – and they uncovered hundreds of pounds of precious and semi-precious gem stones that no one had mentioned.

If the administrators had hired “two guys and a dumpster” to “gut”the place and simply discard all the items within, they would not have found wads of cash in the pockets of foul smelling coats and inside malodorous shoes; geodes so large that it took two men to lift them and so many treasures that they were probably worth more than the house itself!

Homeowner's insurance won't pay for simply “decluttering” a house, but when there is a flood, fire, sewage backup or “puffback,” it is treated like any other home – except getting to the fire or water-damaged structure and contents is far more challenging! And the trash is so thick and intermingled with legitimate valuables that the entire affair can quickly become labor intensive.

This is where a trained contents team can really prove their worth. Like an assembly line, they plow through the debris, separating it into sections “to be thrown away,” “to be donated,” “to be cleaned and restored,” etc. And with their advanced photo inventory techniques, they don't loser or overlook items of value (a thing that is easily and often done by untrained workers).

The adjusters who are lucky enough to find a contents team trained to handle “hoarding jobs” never let them go. It is the only way an insurance carrier can save huge sums of capital on such tricky assignments.

Not all the “votes” are in yet, but you may recall that we have been watching the “aqueous ozone” and “electrolyzed water” cleaning solutions very closely.

In effect they are devices that turn ordinary tap water into a cleaning and sanitizing suspension by running an electrical current through it and changing its ionic composition.

It is approved by the EPA and FDA as a 100% natural, safe, effective cleaner and sanitizer, is “...3000 times faster and much stronger than bleach...” and kills 99% of germs, viruses and bacteria.

It leaves no residue and converts back into ordinary water, so it can be used in hospitals, around newborns and those with respiratory ailments. And it leaves no residue on carpets, counter tops, kitchen floors, office desks and chairs, bathrooms and classrooms.

Since it uses no chemicals, it has absolutely no effect on the environment at all! And those who work with it don't require eye protection or personal protection gear of any kind.

Expect to be hearing lots more about aqueous ozone from us in the very near future!

The adjuster smells nothing. The contents team is baffled and even the agent has come visiting, only to discover no bad smells (even though the owner is adamant that odors still linger).

How do the insurance professionals and the contents pros proceed?

In an article for Cleanfax Magazine, Scott Warrington says, “This psychological odor is not a real odor but your brain can't tell the difference.”

The insightful contents pros employ psychological methods to match the psychological odors. When necessary, they will arrive with their packout vehicles and invite the owner to join them outsidde the home (away from the psychological influence of the “scene of the crime.)”

There they will invite the owner to see and smell how clean and fresh everything is, while ostensibly invited to “Tell the crew which room should receive each item.”

And, when all else fails, Jeff Cross, Executive Editor of Cleanfax says, “This may be the time to bring in the masking agents – 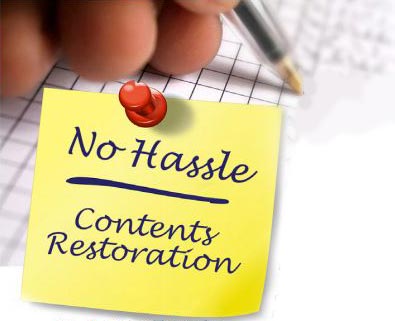 While performing due diligence for their parent company, it is quite common for insurance adjusters to seek ways of cutting costs on any given restoration job. Thus, an adjuster may look at an estimate and say, “You should use fewer dehumidifiers,” or “It shouldn't take that many workers for that part of the task at hand.”

But with contents pros there are rarely such requests.

Industry spokesperson Barb Jackson CR, adds, “Some contractors wait until later in the job to discuss the assignment with the adjuster, but all my contents team managers seek the adjusters out at the very beginning of any project. That way the adjusters can tell us exactly what they will pay for and we proceed based on their signature on our work order – there is no discrepancy because the adjusters themselves have sculpted our estimate to suit their interpretation of the mission. And their bosses normally approve because the adjusters have gotten to know their preferences and predispositions after having worked with them or extended periods of time.”

In an earlier edition we described ow the contents pros restored a $4000 Chanel purse that had been soot covered, drenched in water, frozen for two weeks, but was returned to the owner in pre-loss condition for less than $80.

Trained contents specialists restore valued items on virtually every job – but there isn't a place in programs like Xactimate to show just how much they save the insurance carrier, so their monumental work often times goes unappreciated.

Their reward comes when the adjusters show their bosses how much they saved by not “cashing out” or “total lossing” when they thought they were going to have to. It is then that many administrators recognize that the contents restoration professionals set the “gold standard” for saving money for the carriers.

And that ensures a long and profitable relationship between the insurance firm and the contents company. The more jobs that the contents pros are given, the more valuable they become to the adjusters and their managers.

Most adjusters and contractors are familiar with protectant fabric coatings like Teflon and Scotchgard. And just about everyone has encountered Microban, the sealant that contains an antimicrobial compound.

Now there is a new system in play and we are amazed that no one thought of it before. What happens is that there is an, “...initial application of a disinfectant, followed by the application of an odorless and colorless positively charged polymer, which permanently bonds to a treated surface.”

According to one website, “You could think of it as a layer of electrically charged spears... When a microorganism comes in contact with the treated surface, the spear punctures the cell membrane and the electric charge shocks the cell.”

We like it. You apply a disinfectant, then seal it in with an electrostatic barrier. Sounds ideal for those places where high bacterial counts occur and people gather.