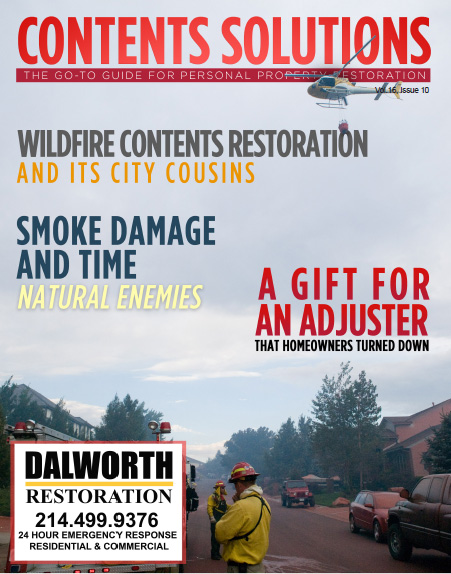 Building owners and homeowners often rejoice when they see the “red cloud” dumped by helicopters or fixed-wing aircraft on the wildfires approaching their homes and offices. But the aftermath cleanup is rarely met with cheers.

The fire retardant that is dropped usually contains a combination of water, fertilizer (with thickening agents and ammonium), and red dye (usually iron based – hence the red color). Smoke, ash and retardant residue are all often found inside houses even though the firefighters stopped the fire from actually coming anywhere near the front door.

Untrained restoration teams focus on the interior, but savvy content pros know that every time the door is opened, particulates come swirling in, so it is common for the specialists to clean a space leading from the owner’s driveway to the foyer. Then “walk-off mats” are places inside as a secondary precaution.

Some untrained teams might be tempted to spray the red-dyed fire retardant with bleach in order to fade its color – the professionals don’t (mixing the ammonium from the retardant with chlorine bleach creates an explosive gas – no kidding)!

Retardants and suppressants can be skin irritants (whether in the city or out in wildfire country), so personal protection gear is essential for such cleanups. While wildfire retardant chemicals appear to be fairly harmless, after all, They are simply water and fertilizer that eventually dries out into a powder that can be vacuumed up or washed away. The truth is, according to researcher Patrick J. Moffett, REA, CHMM, “…They can cause pitting and damage to some building materials and contents. Meaning, the longer they remain on a surface, there can be an increase of damage to finishes and materials including discoloration.“

The city equivalent are foam or dry fire extinguisher compounds. And there are numerous techniques for removing those. H.E.P.A. vacuums of course, but alcohol-based compounds, vinegar-based solutions and more are used to break down the adhesive properties of the extinguisher contents.

Art work, food material, electronics and more, all have to be cleaned quickly in order to avoid a dramatic increase in the loss (actually food – even sealed food – is usually discarded after being exposed to fire extinguisher mixtures).

As is always the case in fire and smoke remediation jobs, a digital photo inventory is made of each and every room and item affected. Mild detergents and surfactants are used to clean hard surfaces. The deodorization process begins as we have described it in previous articles. Many fabric, furniture and paper items are removed to a cleaning facility (after an initial H.E.P.A vacuuming).

And an assembly line of cleaning and deodorizing begins (and continues) until the adjuster and the owner are satisfied.

It is no place for amateurs. Children, the elderly and those with respiratory ailments will be adversely affected by the almost invisible particles that have wormed their way in through every crack, crevice, window, doorway and vent.

Only a professional contents crew has any hope of restoring such a home or office to pre-loss condition. Be sure to hire a good one – the process may be repetitive but there is no good reason it has to be repeated because of cross-contamination errors.

HAVE ASH WILL TRAVEL

As we mentioned earlier, when the contents pros arrive, it is quite common for them to start with a digital photo inventory of the affected items and the impacted rooms.

Unaffected rooms are sealed off so that cross contamination is kept to a minimum. Ash and smoke particulates are not always visible to the naked eye, but under a microscope they are easily differentiated from ordinary dirt.

And soot has the unnerving property of accumulating in layers (sort of like painting a surface, the putting on a second coat). When that occurs, special sponges and solutions are used to break down the bond and remove the particulates.

Smoke odors are another matter. Ash residue travels. Just walking through a room can create unseen disturbances in the air, so special “air scrubbers” are employed, then the professionals seek out the sources of the odors and treat them with specialized solutions, hydroxyls, foggers – and a few favored methods to test and retest before considering the job complete.

The last thing they want to hear – or to hear about from agents and adjusters – is a complaint that the odors are still present (or have returned) after the team has moved on to another job.

We heard an interesting story recently.
A contents manager was passing out air
filtration masks and nitrile gloves to the
adjuster on the case as well as to the
homeowners who had returned to
accompany her on an initial walk through.
The adjuster was grateful, but the
homeowners thought that the gesture
was excessive and unnecessary.

They explained that they might use such precautions on a mold or sewage backup misadventure, but did not think the toxicity
of a “smoky house,” was anything worth
being concerned about. Contents
professionals use ventilation, HEPA
filtration (air scrubbers) and adsorption (activated charcoal) to maintain indoor air quality, but ask any arson
investigator, any firefighter or even any chimney sweep and you will hear
tales of soot contamination through inhalation, skin, eyes
or even accidental ingestion.

They will share stories of cleaning black particulates out of their noses after a
simple job, or blood shot eyes (irritated by
the same air they breathed into their
lungs), or even a “smoker’s cough” from
just one assignment.

The contents pros probably deserve
hazard pay for smoke related assignments –
but at the very least, they may well share
the little protection they have with you
or the insureds. It is an inexpensive,
protective measure that may well provide huge dividends.

We wrote earlier about time being a major factor in mitigating costs on a fire and smoke assignment. But on occasion we have been called in on a project weeks after the event occurred.

Sometimes even after a homeowner or property manager has made a valiant attempt to remediate the smoke and soot damage himself/herself. It is then that the carriers and owners are faced with the fact that the costs for restoration are astronomical.

By that time carpets often need to be replaced (that could have been saved weeks earlier). Glass, crystal and fine china has become “dulled” (etched) by soot, ash and water and the pieces can no longer be restored (just cleaned).

Ash mixed with water is acidic and it will, given time, destroy many household items (or at least diminish their value dramatically).

It is rare that a contents specialist will even attempt to restore electronics that have been exposed to the water from fire hoses and the ash from the initial blaze weeks after the fire – it is simply too late.

Amateurs might waste your time and funds on such losses. Professionals won’t – they know that when the cost of restoring an item exceeds the cost of replacing it outright, it is often time to move onto items that can be saved.

Even when a wildfire has approached a home and been turned away, the ash and the massive amounts of water used to put it out will penetrate nearby homes and precious days may be lost because the owners are not allowed to return home.

When they do, they must move quickly to have the contents pros restore their valued items before the acids have a chance to do more damage.

The best test? If their homes or offices smell like smoke, there are smoke particulates in the wood, books, papers, cloth, carpets and every nook and cranny. It has to be removed as quickly as is humanly possible.

Not in weeks, but in days (or hours) – or the cost will increase geometrically.

During the pack out process, some beginning (untrained) contents companies make some pretty basic errors. But whether the contaminated contents are as a result of a wildfire, inner city apartment fire, or kitchen fire in a four star restaurant, the first rule of packing out smoke damaged contents is to keep non-contaminated ones.

Even the boxes containing items with smoke odors aren’t allowed to travel in the same transport as ones that have no such odors. If they are placed in vaults at the cleaning facility, the contaminated boxes are never placed in the same vault as non-contaminated ones.

Why? Because one box (eve a sealed one) can release enough odor to contaminate the entire vault. Beginners may think they are saving money by using shortcuts, but in the long run, they have proven to be remarkably expensive.