January 2015: Save Time, Money, and Effort for Adjusters 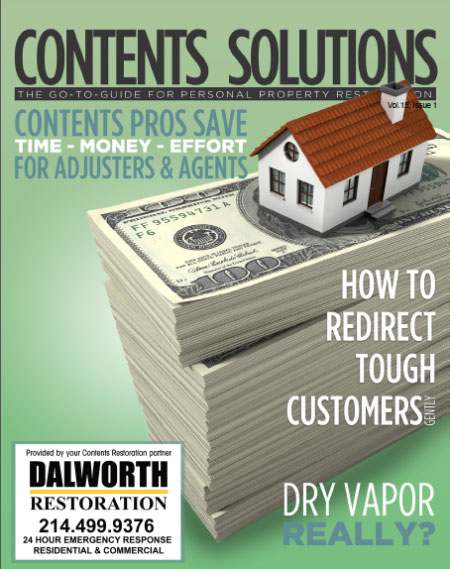 Contents Pros Save Time, Money, and Effort for Adjusters and Agents

Hundreds of insurance adjusters have already discovered the value of a trained contents restoration team – others are still bringing in “two guys and a truck” for all the items that are “cashed out” and “cleaning ladies” to tidy up after them.

The challenge of course is that insurance carriers are “hemorrhaging money” with so many fire and flood claims pouring in and the new or uninitiated agents or adjusters say goodbye to substantial sums virtually every time they send a truckload of valued items that could have been restored by well-educated contents pros and their affiliates to the local city or county disposal site.

Contents restoration teams restore (rather than replace) as many items as are practical. And they can quickly evaluate whether a specific object can be restored in such a manner as to save the carrier money or whether the restoration process would be more costly than simply replacing.

Wet furniture, soot encrusted televisions and computers, books, antiques, clothing, bedding, art, fi and a whole lot more have been routinely thrown away until a contents professional intervenes and proves that these items can be restored to pre-loss condition (and often to better than pre-loss condition). 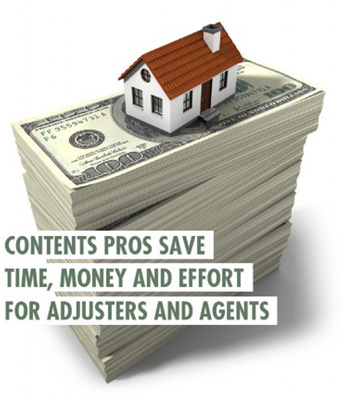 And of course, any experienced adjuster knows that if you have a $5000 piano that is scorched, smells like smoke and sounds like tin cans being struck by a hammer – and it can be restored for less than $1000, the carrier has just saved $4000.

A $3000 fur coat that smells like a camp fire and can be restored for less than $1000 instead of “total lossed,” has just saved another couple of thousand.

Those insurance adjusters who have seen this (and much more) accomplished by contents teams are amazed that their associates haven’t caught on to the new trend.

And, of course, insurance agents are most interested in getting policies renewed. When an owner is told that it would be too expensive to restore various valuables and that they will instead receive either a substitute or a cash settlement and the owner insists that there is no acceptable substitute and no amount of money could possibly equal the item’s true worth, the conflict that ensues virtually ensures that the policy will not be renewed and that the dissatisfied customer may well cause more headaches for the carrier and the adjuster.

Contents pros restore such items by innovative and unexpected means but that is only one of the reasons adjusters want them on their team.

They have restored everything from porcelain dolls to fishing rods, from antiques to cell phones, from big screen TVs to moose heads and every time they have done so, they have saved the insurance company serious sums of money.

Sometimes they use high tech gadgets, sometimes they use microfiber cloths and “elbow grease,” but they never let the insurance representatives down. All this past year you have been reading about the clever, inventive ways we help you achieve your goals.

And we look forward to serving you again this coming year! We are already the best in North America – and we can hardly wait to see how we help you meet the new challenges in your profession.

You can count on us.

HOW TO REDIRECT TOUGH CUSTOMERS (GENTLY)

We just read an article written by a contractor who told the tale of how a homeowner followed him through the house removing the tabs and blocks he had placed under the legs of the furniture.

He didn’t know she was doing it until he came down a hallway and found them piled there.

When he went to explain the necessity of such items, she simply could not or would not understand.

And when one of her pieces of furniture was stained because it was not elevated, the contractor was blamed!

Adjusters face unreasonable clients just as often – and as you know, in these days of “Internet vengeance,” an individual can disparage you, your company or your policies and can do so with impunity.

Contents managers are often trained to handle such matters with grace and equanimity. You can count on them to help navigate such rocky encounters.

One of their favorite techniques is to “distract” the customer with an “important question.”

As in, “Yes, it is a shame that your policy did not include that fiberglass porch covering, but the paneling for your playroom just arrived and it seems a little darker than what I thought it would be and I’d hate for you to…”

We know that you have heard about the “quick tricks” and “cheap fixes” that amateurs use to restore damaged computers, CD players, big screen TVs and other assorted electronic equipment. We have read those “Internet fiddles” that can be performed quickly and inexpensively. Sometimes they even work – WD 40® could theoretically clean soot from fragile electronic components. Vodka might help dry out a wet cell phone (although we are hard pressed to figure out how).

The truth is far less “dramatic.” Contents restoration professionals who are trained to restore electronics, know that the first thing to do is to unplug the suspect device – many a computer or flat screen television has been lost by an owner or untrained worker turning it on to “make sure it still works,” only to fry the very components they were attempting to restore!

You will probably be easily able to spot a well-run warehouse – they often just “look” right.

The vaults are in order and correspond to the photo inventory. Cleaning and packing materials are neat and readily at hand (some contents managers actually have an inventory for materials just as they do for a client’s valuables – when some solution, equipment or material is used, the inventory tells when it will need to be replaced and when the stock will need to be replenished).

The work area will be uncluttered and created to maintain a flow of work from one station to another. In one facility we saw that the tables had been elevated by putting pvc pipe over the legs and thus raising them to a height at which the workers did not have to bend in order to process the items from a recent job).

You may see areas where smoke-damaged items are “quarantined” to keep other items from being contaminated.

It is not uncommon for special drying chambers, deodorization chambers, cleaning areas and even temperature controlled zones to be erected for special projects.

A well run contents facility will look and feel not unlike an “assembly line for success.”

As we have said in earlier issues, time is of the essence. If there have been smoke particulates in the air and they have mixed with the moisture that lingers even after the fire hoses have been turned off, they can create an acid residue that will eventually damage the electronics (sometimes in under 48 hours).

But, if the fire has been minimal and contained in another room, the electronics may need nothing more than a general cleaning of the case and other exposed surfaces (example: a television screen or computer case). In such instances, the procedure is meant to prevent discoloration of the exterior components only. This can help keep expenses to a minimum.

If there appears to be possible or potential damage to the internal components, the contents manager will often call upon an expert (either in house or from their data base) to evaluate the situation and possibly perform the cleaning.

Such cleaning is done with deionized water and gentle sprays. And after the units are properly dried, they are often run for many hours to ensure that they are safe.

And speaking of “safe,” it is common for contents pros who restore electronics (especially computers) to maintain a “chain of custody” and strong security measures for both home and office computers during this time when company or personal data could be compromised.

This is in addition to the “digital photo inventory” that keeps track of where an item is located and each step of the cleaning and restoration process.

You know how we feel about ozone. It does its job, it deodorizes – everything. The problem is (and always has been) that it dries out plastics and leather, it discolors some metals and can be very hard on humans.

We’ve mentioned “dry vapor” in earlier columns, but one company has a new twist that we will investigate further.

It is (according to the manufacturer) a “…rechargeable, portable tool that can quickly and safely eliminate odor in up to 20,000 square feet of space. Designed to treat an area’s atmosphere, structure and contents simultaneously …is able to deliver a high-intensity treatment of non-toxic, odor-neutralizing dry vapor.”

A non-toxic alternative to ozone? Stay tuned! This one is well worth looking into.